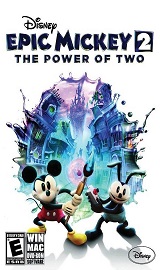 The PC version of this game was released in October 2013, but it's good
enough to release it even now. Also we have cracked latest version of
Securom on this one

In Disney Epic Mickey 2: The Power of Two, gamers will play as Mickey Mouse
and for the first time ever, Oswald the Lucky Rabbit - Walt Disney's first
cartoon star - in an all-new adventure of creativity and discovery. The
game returns Mickey Mouse and Oswald the Lucky Rabbit to Wasteland, an
alternate world filled with 80 years of forgotten Disney characters and
theme park attractions. Now, Mickey and Oswald must join forces as true
partners - Mickey with his magical paint brush that wields paint and
thinner, and Oswald with his powerful remote control that allows him to
command electricity. Unleash the power of creativity in an epic battle to
save this magical world of Wasteland and change it forever in this heroic
adventure

1. Burn or mount the image
2. Install the game
3. Copy over the cracked content from the /Crack directory on the image to
your game install directory
4. Play the game
5. Support the software developers. If you like this game, BUY IT